Between the Champs Elysées and the Tuileries Gardens, there lies the Place de la Concorde. With traffic roaring and careening about seemingly in all directions, it is easy to feel lost on its 84,000 square meters. 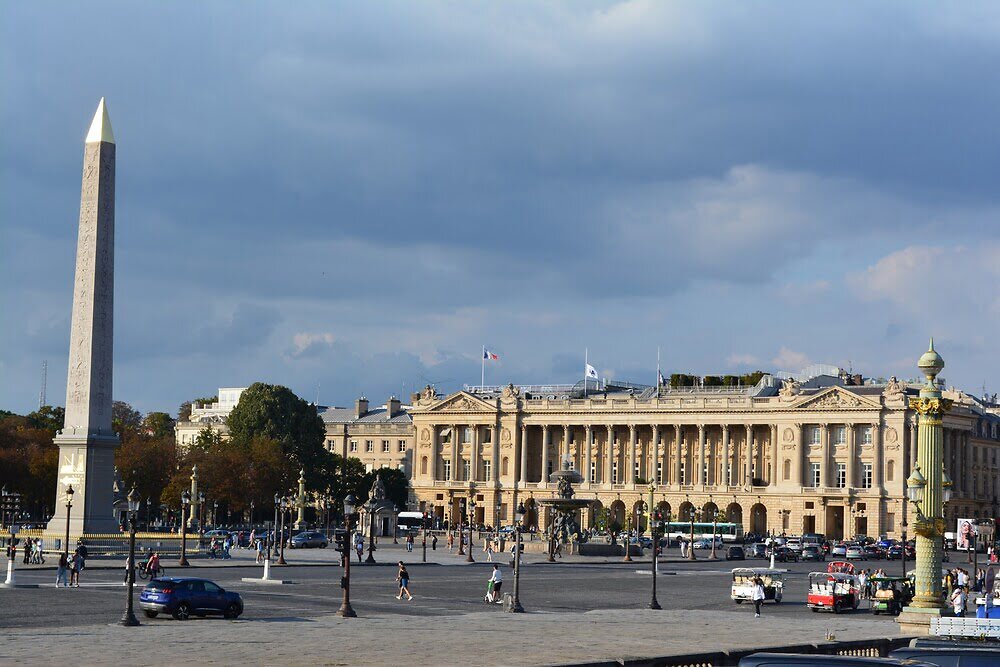 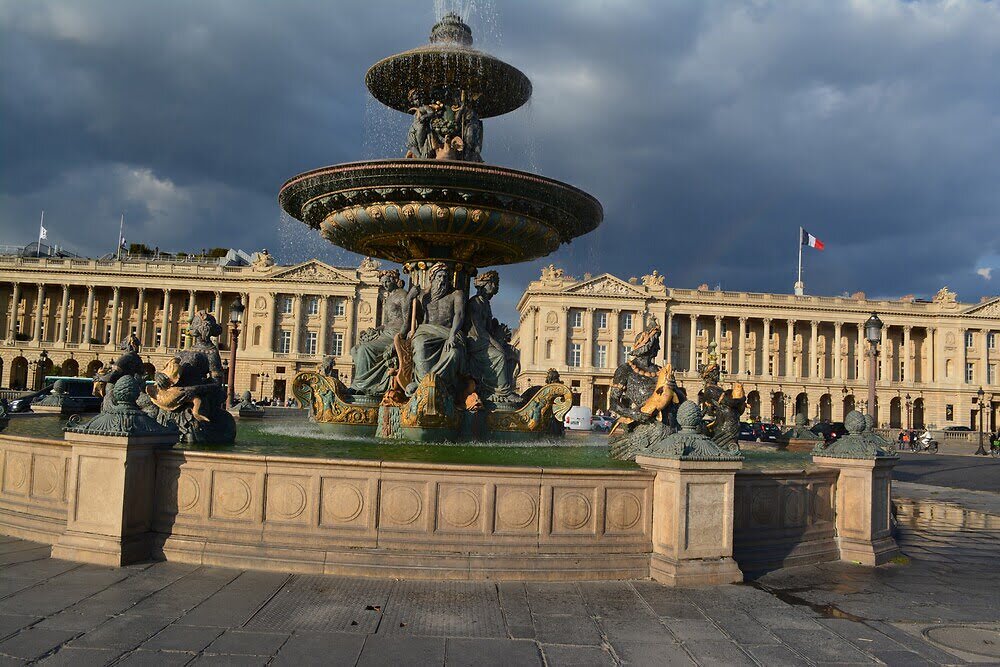 It was designed by Gabriel begun in 1748 and completed in 1763. It was first called Place Louis XV, and planned as a worthy setting for the royal statue. Place de la Concorde is often associated with the bloody events that took place on its pavement. In 1770, for example, 133 spectators were trampled to death at a huge fireworks display on the occasion of Marie-Antoinette’s wedding to the Dauphin.

A few decades later, the revolutionaries, who were intent on eliminating all royalist monuments from the face of the earth, removed Louis XlV’s statue, dubbed the plaza Place de la Révolution, and set up their guillotine on it. Louis XVI, Marie-Antoinette and 1119 other people lost their lives here, among them Charlotte Corday (the murderess of Marat), Danton, Philippe-Égalité and Robespierre. In order to help these bloody events on their way to oblivion, the Directory renamed the square Place de la Concorde in 1795. And, officially, the 1830 Revolution renamed it Place de la Concorde.

Two commanding edifices, whose colonnades are copies of the Perrault wings of the Louvre, rise up over the north side of the plaza. And, currently situated in the right-hand building is the Naval Ministry. Just on the Place de la Concorde sits the famous “palace” the Hôtel Crillon, which is amongst the citadels of Parisian snobbery. Formerly, its elegant salons served as the winter quarters for the famous Chateaubriand family. Today it houses the French automobile club. These are just two examples of Louis XV style, by Gabriel.

Just at the entrance to the Place de la Concorde, on either side of the Champs-Élysées, are the Chevaux de Marly.

There are eight statues representing the eight major cities of France: Brest and Rouen (in the northwest), Lille and Strasbourg (to the northeast), Lyon and Marseille (on the Quai des Tuileries) and Bordeaux and Nantes (in the southwest). The statue representing Strasbourg was modelled by the actress Juliette Drouet, who was a muse of Victor Hugo. You can find these statues on the four corners of the square.

In the center of the plaza is the Obelisk of Luxor, a pink granite monolith 23 m (73 ft) high and weighing 220 tons. It is 3,300 years old and decorated with hieroglyphics exalting the reign of the pharaon Ramses II. The Obelisk was presented as a gift to Charles X by the Egyptian viceroy Méhémet Ali in 1829. The monument was installed here under Louis-Philippe who, bearing in mind the death and destruction witnessed by Place de la Concorde, was pleased to have found a non-political monument to replace the unpopular Bourbon Louis the XVth statue. So that future generations would be reminded of the effort it required to erect this colossus here, the procedure, including the mechanical devices that were used, are portrayed on the pedestal. After three years of travelling from the Nile riverbanks one anecdote reminds the suspens of this enterprise of erection before a crowd of 200,000 people. The Obelisk wasn’t upright yet when the huge winches reached their mechanical limits probably due to their location. From the silent crowd holding its breath a man’s voice shouted “moisten the ropes!” A sailorman of the old days knew that hemp ropes would shrink while drying…